Stillmank Brewing Company, how it all began…

Stillmank Brewing Company founder, Brad Stillmank, was born and raised in Wisconsin. In his senior year of high school Brad convinced his parents that he needed to attend a college near a mountain so he could ski for a study breaks (and they fell for it). So off to Colorado he went to study business.

Though not part of his school curriculum, or his time on the mountain, Brad, enjoyed a beer or two with friends. He realized some very interesting beers were being produced but they were unaffordable to this college kid. He decided to try home brewing. The first batch was a success, so many batches followed. After graduating with a degree in marketing, Brad started working for Ska Brewing in Durango, CO in 2003. He quickly earned his brewing certificates from the University of California at Davis allowing him to brew at all hours of the day and night (ah, the life of a brewer) as Ska was, and still is, a growing craft brewery.

In 2006 Brad married his love, Erin, and together they decided to move to Green Bay. For Brad this was a chance to return to his home state and follow his Packers more closely. Brad stayed connected to beer by working for Kay Distributing as their 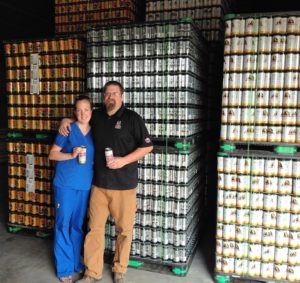 Craft Brand Manager. And he returned to home brewing (Erin said their moving truck was filled with predominantly brewing equipment and bags of grain).

Brad was one of the first 20 to become a Certified Cicerone in 2009. In 2011 Brad and Erin formed the Stillmank Brewing Company. On weekends, he brewed and packaged his flagship beer, Wisco Disco, at Milwaukee Brewing, who at that time, had excess capacity. The beer was then shipped and sold in the Green Bay area. On April 1, 2014, with his first brand selling well, Brad purchased the former Builders Supply warehouse on the East side of Green Bay so he could bring the brand home. Brad’s recently retired father so enjoyed Wisco Disco that he offered to be the general contractor to convert the structure to a brew house. On October 1st of that year the Tap Room opened and additional brands were introduced. Erin continues to support Brad and the brewery by managing the tap room, quality control, special events, and social media.